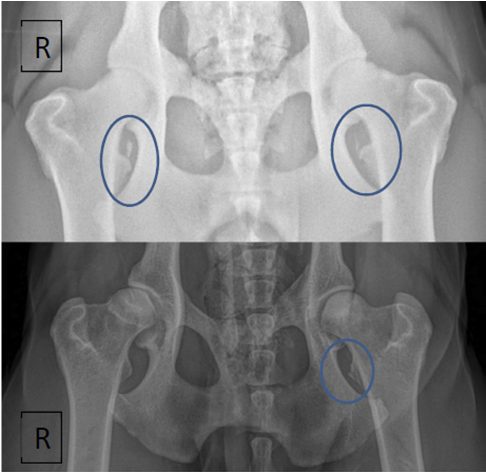 Objective: Iliopsoas injury and strain is a commonly diagnosed disease process, especially amongst working and sporting canines. There has been very little published literature regarding iliopsoas injuries and there is no information regarding the ultrasound evaluation of abnormal iliopsoas muscles. This manuscript is intended to describe the ultrasound findings in 73 canine agility athletes who had physical examination findings consistent with iliopsoas discomfort. The population was chosen given the high incidence of these animals for the development of iliopsoas injury; likely due to repetitive stress.

Results: The majority of pathologies were localised to the tendon of insertion, with the majority being low grade I-II strains (80.8%). Tendon fibre disruption (71.2%) and indistinct hypoechoic lesions (91.8%) were the most common of acute changes noted. Hyperechoic chronic changes were noted in 84.9 percent of cases. Acute and chronic changes were commonly seen together (62.8%).

Conclusion: Diagnostic musculoskeletal ultrasound was used to identify lesions of the iliopsoas tendon consistent with acute and chronic injury, as well as identifying the region of pathology. The majority of agility performance dogs had low grade acute strains based on the tiered system, with mixed acute and chronic lesions being noted frequently.